Creatine Timing: Pre or Post That is the Question 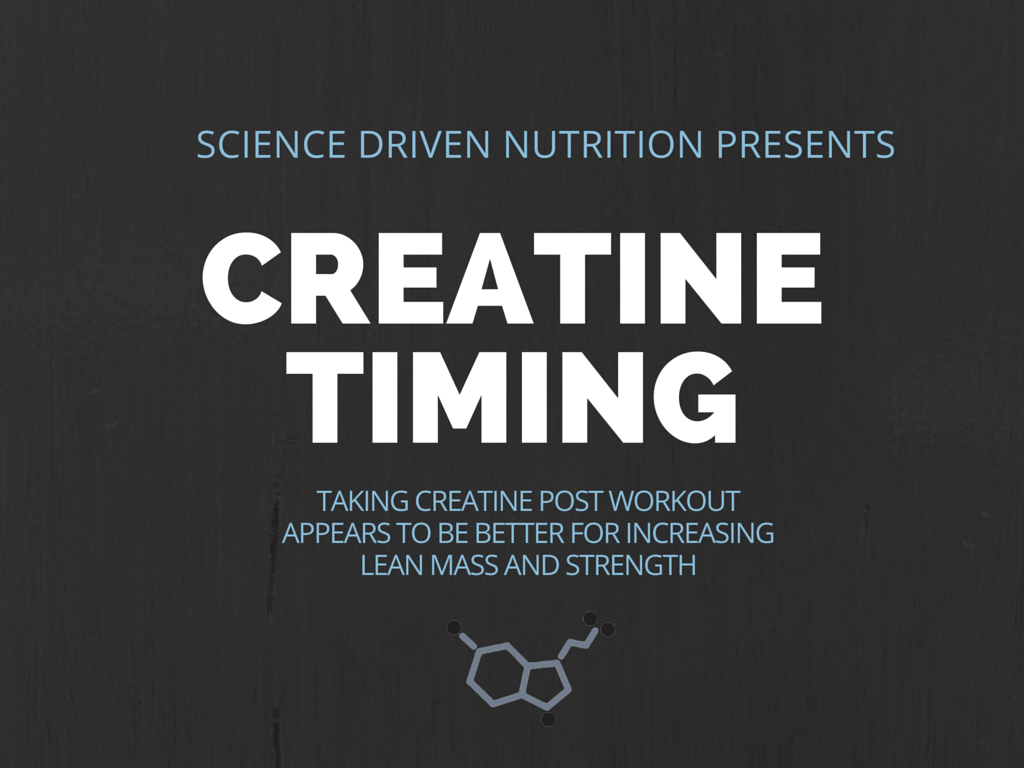 The research surrounding the ergogenic effects of creatine supplementation is extensive with hundreds published studies looking exactly at those two outcomes. Approximately 70% of the research has reported a significant (P<.05 for the stats people out there) increase in exercise capacity, while none have reported an ergolytic effect.

In both the short term and long-term, creatine supplementation appears to enhance the overall quality of training, leading to 5 to 15% greater gains in strength and performance. In addition, Nearly all studies indicate that “proper” CM supplementation increases body mass by about 1 to 2 kg in the first week of loading.

In the International Society of Sports Nutrition position stand on creatine the authors state, “The tremendous numbers of investigations conducted with positive results from CM supplementation lead us to conclude that it is the most effective nutritional supplement available today for increasing high-intensity exercise capacity and building lean mass”8. I guess the case is closed on that front.

Now here is the real question. Does the timing of your creatine influence its efficacy? Well for years I was convinced it did not matter at all when you took it. . . but it turns out I might need to update my beliefs.

This recent paper published by Antonio and Ciccone looked at whether pre or post workout creatine supplementation was superior.

Antonio and Ciccone took 19 male recreational body-builders and put the question of pre vs post workout creatine to the test.

While the study started with 22 subjects, 3 dropped out for no reason (have you ever met men in their 20s… we are flakey creatures… this didn’t surprise me)

The 19 subjects were randomly assigned to either a pre or post sup group (in this type of design where you compare efficacy of doses you don’t’ “need” a control group, which can be “costly” statistically speaking) and were consumed 5 g of creatine either before or after their training

The participants followed a periodized, split-routine geared primarily towards muscle hyperotrophy and involved training 5 days per week for 4 weeks. Could the protocol have been better? Sure. . . anything can always be improved. But it did have each group doing equal volume in a program that was designed to elicit hypertrophy.

See the full article for full analysis of the training

The investigators used 24 hour recall so they could make sure diet wasn’t influencing the results. Now I know food recall is not perfect and this is definitely a limitation of the study but it is likely that any error in recall was systematic and random, making it unlikely to effect the results and ultimate conclusion of the study

Thank god they didn’t use bioelectrical impedence (BIA). They used one of the better methods of testing, Air Displacement Plethysmography, AKA BodPod.

They tested strength using a 1RM on bench. . . following a fairly standard protocol (unless you are me who just wings it most of the time… hey.. I measure and science stuff all day in the lab. . . a lot of my training at this point is by feel because I can’t stand to follow another protocol after a day of sciency protocols)
Now some of you are going to get up in arms (see that pun there) about not using the squat or the deadlift or something… but the bench press is a reasonable and more repeatable measure of strength than a squat. At least that’s my observation after years of research.

Stats Baby!
The author’s appropriately used a 2 way Anova (Dose x Time) and then did follow up analysis using paired t-test (I am curious why they didn’t use a Tukeys HSD Post-Hoc or a bonferonni correction in their multiple t-tests but that’s kind of quibbling and I’m not a quibbler). Overall it was the appropriate analysis.

Now the cool part is where they looked at confidence intervals to determine how likely the effect was to be “meaningful”. . . this was super cool! See the paper for more on that aspect

Ok, I have to start by saying I love the way the authors presented their findings of the fat mass (FM) and fat free mass (FFM). Since they had such a small samples they could show each persons change which makes the data so much more interpretable than just smashing it all into a bar graph. We can actually see individual responses.

When we look at the individual responses it looks like every subject in the post group showed improvements, which was not the case in the pre group.
It also looks like taking creatine post-workout might augment strength improvements from training. At least for a 1 RM in the Bench Press.   And since I am so nice I put all the relevant data into one figure for you too oogle over.

When you boil it down, it looks like taking creatine after your training might be more beneficial. It can’t hurt so maybe switch to taking it after you train!