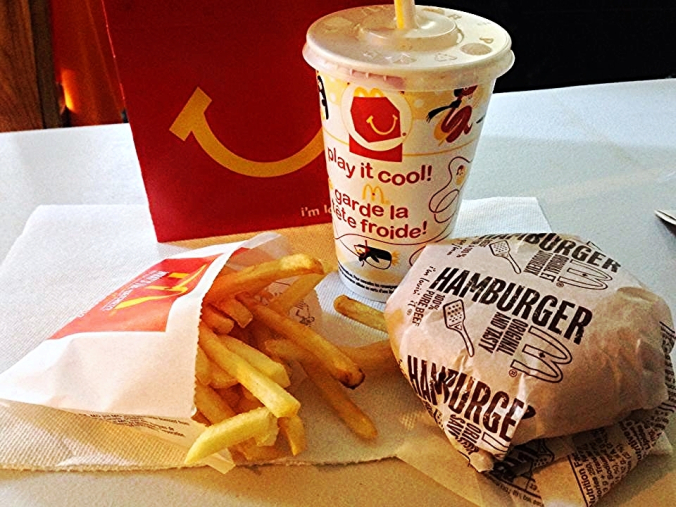 TL;DR: When it comes to recovering muscle glycogen from exercise fast food appears to be as effective as sport supplements.

Last week we talked all about how carbohydrates (CHO) are likely critical for top end performance when competing at very high thresholds. One important aspect of high-level, high-intensity training is recovery, including restoration of glycogen stores and remodeling (read repairing) of damaged skeletal muscle tissue (1).

Instantly, your thoughts will drift towards supplements that are marketed to “maximizing your gainz” following a training bout.

The supplement market has saturated the brain space.

Your first thoughts about post-workout recovery likely involves some post-workout cocktail comprised of a CHO source, like dextrose or maltodextrin, and some form of fast digesting protein, like whey protein isolate.

Despite the “special formulations” and the marketing hype, what if supplements aren’t all that special for certain aspects of training? Or more so, what if you just want to grab something quick and eat some food instead of drinking a massive dose of calories after you train when you know you may be hungry within ~10 minutes of that protein shake slam?

Well, I’m glad you asked, because a recent publication by Cramer et al (2015) shows that McDonalds post-workout is just as good for replenishing glycogen stores as your expensive sport supplements!

Postexercise Glycogen Recovery and Exercise Performance is Not Significantly Different Between Fast Food and Sport Supplements.

Cramer and his team looked at the effects of an isoenergetic meal consisting of sport supplements (SS) or fast food (FF) on muscle glycogen recovery and exercise performance.

Individuals reported to the laboratory on three different occasions. The first was to acquire the subject’s peak oxygen uptake (VO2peak) and subsequent power output at max to be used during the glycogen depleting exercises.

Each subject completed an identical exercise protocol on two separate occasions separated by a 7 day washout period. Each trial consisted of a 90-min glycogen depleting ride, followed by a 4-hr recovery period where subjects consumed either FF or SS in an incremented fashion. Following the four hour recovery period, subjects completed a 20-km time trial (TT) on the same cycle ergometer used in the previous session.

Subjects were required to consume absolute amounts of either SS or FF immediately after the 20-km TT and at the half way mark during the recovery period. Each food item was weighed utilizing a digital food scale to control for portion sizes based on nutritional labels. Both the SS and FF were matched calorie for calorie and macro for macro.

Total cholesterol, HDL, LDL, triglycerides, glucose, and insulin were assessed at 7 different time periods during the recovery period in each visit via a venipuncture technique inserted into the antecubital vein.

Two muscle biopsies of the vastus lateralis muscle for each experimental visit in order to assess the muscle glycogen concentrations using an enzymatic spectrophotometric method.

First looking at the main outcome variable of the study, muscle glycogen restoration. Was there a difference? Significantly speaking, the authors concluded that there was no significance between SS and FF on total and the rate of muscle glycogen repletion. However there was a main effect on time, meaning, muscle glycogen stores increased from 0 and 4 hrs post recovery in both conditions.

Dietary caloric value of both the SS and FF diet consumptions were almost matched calorie for calorie and macro for macro. FF contained 1330.06 calories where the SS contained 1303.29 calories, so only a ~30 calorie difference. From a macro standpoint, the FF items had 6 more grams of protein, 13 g less CHO and 1g less of fat with ~600 mg more sodium. So overall, besides sodium content of the food, caloric value was identical.

Now what about that dreaded hormone that comes in like a fairy sprinkling all of its unwanted fat dust on everything…insulin. Shocking to some, but not all, there was no difference between serum insulin concentrations between SS and FF trials at any time point during the recovery phase. Furthermore, blood lipids (total cholesterol, LDL, HDL and triglycerides) and blood glucose were not different between conditions either.

As we migrate away from blood and muscle tissue to more meaningful data, we get into the actual performance measurements, the 20 km TT. Simply put, even if we can restore muscle glycogen with either a McDonalds hamburger and fries or a rock hard Powerbar, the results that mean anything is how well we can perform off certain food items. Which, based on the results of the current study, the authors found that there was no difference between all the TT for either SS or FF (34.3 ± 2.1, 34.5 ± 1.9, 34.1 ± 1.8, and 34.3 ± 1.7 for PTT1, PTT2, SS and FF trials, respectively).

Although there was no differences seen in any measurement, from blood biomarkers to muscle glycogen restoration, to even performance, there was a slight difference between conditions on the questionnaires. Such as, the subjects informed the researchers that they felt fuller after consuming the SS rather than the FF items after the 2 hr mark. Furthermore, the 2nd FF meal was reported to be more satiating then the 1st FF meal. Which, could be due to the fact that the meal was better-rounded and probably tasted a tad better being that it was a hamburger and fries vs plain hotcakes (pancakes for you Americans) and a plane hash brown. Other than that, there was no other differences reported between the two different meal options.

One last fun fact to point out is the cost of the SS vs FF items (see the above table). This wasn’t reported in the actual article itself, but after doing a bit of shopping and online googling, we came up with the cost per item and total expense per meal in order to replicate the meal options provided in the study at hand. Funny enough as it is, the FF items actually came out substantially cheaper than the SS items ($8.56 vs $10.93, respectively). A special note, none of this factored in taxes and/or price differences between countries. All prices are from the US and one should note that the supplements usually have to be bought in bulk.

So what is the main thing we can take away from this highly conflicting study? Conflicting in the sense that (1) most people first assume SS would outperform any other food item when it comes towards sport performance, and (2) most people view FF, specifically McDonalds, as the devil.

For simplicity, basically this study shows us that if you want to consume whole (fast) food after your workout vs supplements marketed towards sport to replenish glycogen stores and perform just as well in your athletic endeavors, then you can do so without any short-ter negative side effects on glycogen replenishment.

As it boils down to it, when it comes from a simple performance standpoint, your body doesn’t really know if it is getting refined CHO from a McDonalds hamburger bun and fries or a jelly like energy chew produced by Powerbar, CHO are CHO.

However…one might begin to backlash this study and also the researchers behind it stating that they are advocating people to consume McDonalds after they workout. That would be completely ludicrous to claim. The authors state both in the introduction and the discussion that this was not the objective of the study, and people should remember that the results are context specific.

The authors sought to unveil that there are other convenient options to your general sport supplements out there in order to augment performance, there is no aspect of long-term health in this study.

Is a McDonalds hamburger as good for your health as an organic grass fed, free range hamburger on a whole wheat (or if you are against gluten…a gluten free bun) bun? I would say that is highly unlikely.

From a performance standpoint? McDonalds seems to be just as good as your supplements at restoring muscle glycogen. It appears that carbohydrate, protein, and calorie content are the main drivers of glycogen replenishment.

And before you lash out at the McDonalds used in this study, one should look at another common food item that has grown in popularity to maximize recovery and augment performance, chocolate milk (2). Chocolate milk in itself is basically regular milk, with wait for it…refined sugar.

Let’s close with this. As we recently published in Alan Aragon’s Research Review, diets are highly contextual.

If you are a lean, hard training athlete with a healthy pattern of eating consuming something like McDonald’s occasionally after hard training sessions is probably completely fine for performance (for a case study look up Michael Phelp’s diet when we was winning 8 gold medals at one Olympics).

If you are a normally sedentary, obese individual with poor nutritional habits and looking to lose weight, it would probably be more beneficial to skip a post workout McDonalds and stick with more of a “healthful” post workout option.