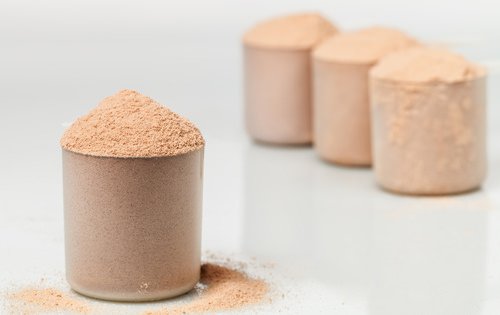 Losing weight requires a negative energy balance (you must consume less energy than you expend). Often times during caloric restriction people lose lean mass along with fat mass. Now I don’t know about you but if I want to lose fat I also don’t want to lose a lot of hard-earned muscle tissue.

One way that has been shown to minimize loss of lean mass while restricting calories is to engage in resistance training (i.e. pumping iron). There is also some evidence to suggest that consuming a diet higher in protein can reduce the loss of lean tissue.

This begs the question: Could supplementing with Whey Protein be beneficial for minimizing loss of lean mass during caloric restriction and optimize fat loss?

Dudgeon and his fellow scientists conducted a study to examine whether supplementation with a commercially available whey protein before and after training would be more beneficial for lean mass than equal calories of carbohydrates on body composition during an 8 week caloric restriction phase.

The authors recruited 16 subjects between the ages 21-28 who had been regularly resistance training roughly for at least 2 years and had no existing injury.

Each subject in the study was provided with an individualized caloric-restricted diet based on body mass, body comp, resting metabolic rate, and a few other demographics using the Harris Benedict formula with an activity factor of lightly active (1.35) for training days and sedentary (1.125) for rest days.

The diet was constructed to simulate an eight-week “cut diet” designed to reduce body fat. The diet was also created to adjust macronutrients for training and rest days.

It looked as follows:

The participants were randomly assigned to either the control (CON) or whey (WHEY) group. Subjects in the CON group were instructed to consumer 28 grams of a carbohydrate based supplement (POWERADE ®) before and after training (a total of 56 grams). The WHEY group was instructed to consume either 28 grams of whey protein (Scivation Whey from Scivation Inc) before and after each workout.

Also, one thing to note is that Scivation did pay for this study, which is pretty epic. The time, resources, and not knowing how the results will turn out makes that a pretty big gamble on their part

Food intake was not explicitly recorded. However, the participants were given exact meal plans and had weekly interviews with the researchers to ensure adherence. While this was a limitation in the study, I don’t believe it is a strong limitation based upon my experience conducting similar studies.

As training could likely influence the results the participants recorded all of their training so it could be accounted for in the analysis.

*the only way to directly measure body composition is an autopsy… and I think that might affect the participants ability to conduct an 8 week study.

The authors also tested muscle strength by testing 1 RM in the bench and the squat (obviously to parallel!). They also then did a “muscle endurance” test where the participants performed 80% of their 1 RM as many times as possible while retaining proper form.

Paired and unpaired t-tests were use to assess changes over time and between groups. Tukey’s post hoc tests were also used. One important aspect of this study was the repeated measures (I mean that in the sense they performed the same test at the beginning and end) so the authors calculated intraclass correlation coefficients; essentially they wanted to check reliability of their test-restest procedure

Both groups lost about the same amount of weight (roughly 5-5.5 pounds) which means the calorie restriction was successful.

They WHEY group lost about 5 pounds of fat mass while the control group lost about 2-2.5 pounds. This was not statistically significant… but I would argue it is physiologically and aesthetically meaningful.

If you go read the actual paper the authors report the individual responses. This data is really interesting and pretty compelling. But as it is not an open access paper I don’t want to paste the graphs directly in here

Now this is interesting… the RMR decreased in the WHEY group but not the control. There was about a 300 calorie a day difference between the groups (the comparison between the two was not statistically significant).

There was no difference between the WHEY or the CON in regards to the 1 RM squat, but only the WHEY group showed improved bench press strength.

The endurance piece tells a different story. The control group had better improvements in local muscle endurance than the WHEY group for both the squat and the bench.

During a state of caloric restriction, consuming whey protein before and after training appears to be beneficial for minimizing loss of lean mass.  If you are training hard and trying to drop a few percentage points of body fat you would likely benefit from supplementing with whey around your training.

Why might this be possible? There are a lot of plausible answers but I think this figure highlights one reason why it might be possible.