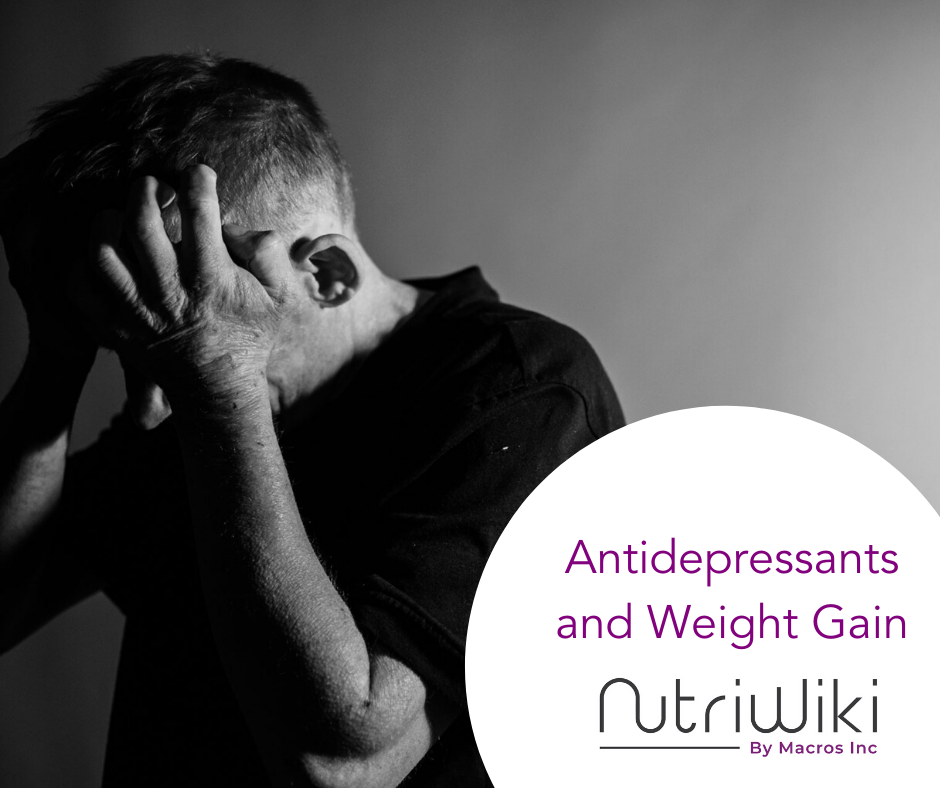 Depression can have a major impact on the motivation to exercise and/or to follow a dietary plan to maintain weight or lose weight. Often times individuals who are being treated for depression can gain weight. Weight gain from treatment for depression can be either a sign of improvement in patients who have weight loss as a symptom of depression or a residual symptom in patients who overeat when depressed (1). Some of this weight gain is due to antidepressant medications, such as tricyclic antidepressants (TCAs), monoamine oxidase inhibitors (MAOIs), and selective serotonin reuptake inhibitors (SSRIs). As roughly 13% of adults in the United States are on some form of antidepressant, it is important to understand if, and how, they affect body weight. This NutriWiki will cover the effects of antidepressants on weight gain.

SSRIs modulate serotonin in the brain, which can alter mood and hunger signals. However, SSRIs are not completely selective and can have off-target effects which also can affect hunger and drive weight gain. Specifically, SSRIs may alter hunger around carbohydrates in individuals with certain neurochemistry (e.g. those who see large effects of SSRIs on their 5HT2 and H1 receptors). SSRIs may also have slight effects on hormones and inflammation that may contribute to weight gain, but these are not well understood in humans.

Other antidepressants such as MAOIs and TCAs may work differently than SSRIs, but they also are not well understood. For example, MAOIs may work to increase dopamine and drive hunger, but may also have an effect on blood glucose which may effect hunger. However, these effects are also not well understood.

Given the unclear landscape of precisely how these drugs may cause weight gain, the best thing to understand is their end results on body weight and look at how to mitigate those effects.

The best course of action to address weight gain while on antidepressants is to be cognizant that antidepressants can affect hunger and satiety and may lead to increased food consumption. There may also be a benefit of increasing physical activity, both structured exercise and non-structured physical activity to help increase energy expenditure (there are also benefits of exercise on mood that are independent of energy expenditure).