Fasted Training: Is it Better for Fat Loss? 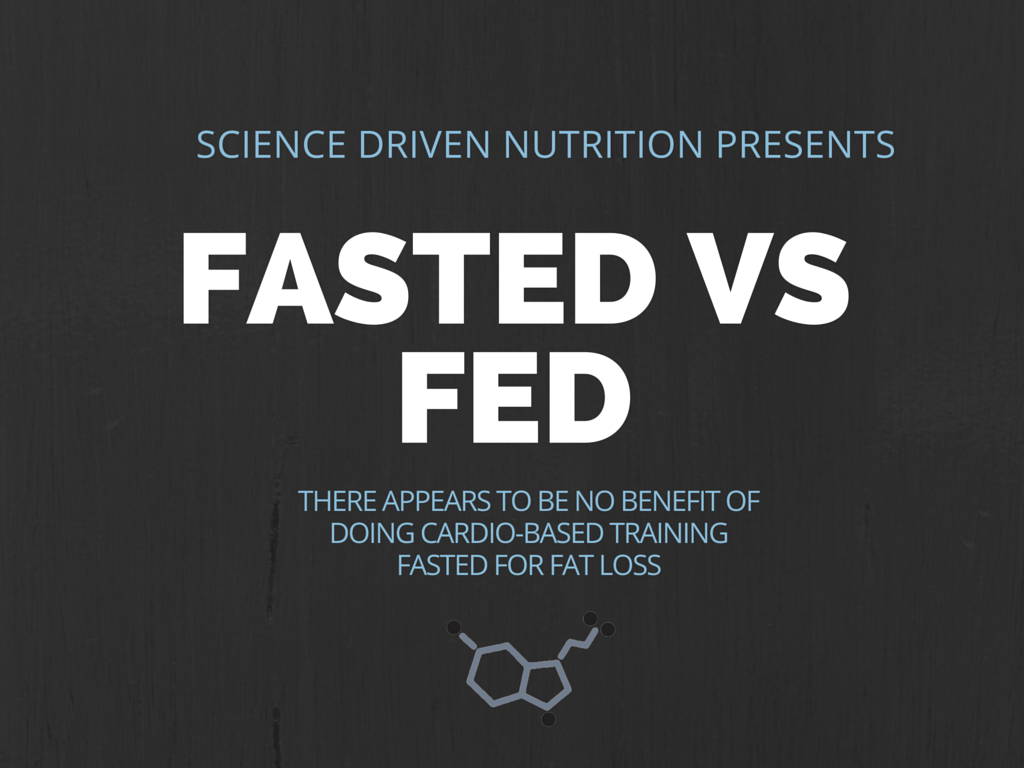 Ancient fitness lore tells us that skipping pre-workout carbs/ training fasted increases your fat loss because your body will be using more fat for fuel during the workout. For decades poor souls have been enduring training sessions on an empty stomach in hopes of getting shredded. Well, the ancient lore can go to the burial ground. It turns out training fasted is no better for fat loss than training in a fed state. In fact, it may be more beneficial to train fed!

A 2014 study by some super smart dudes (Brad Schoenfeld, Alan Aragon, and James Krieger) explicitly showed no difference in fat loss between training fasted versus training with carbs on board (and some protein and fat) (1).

Now this is really interesting because there is a ton of research showing that consuming carbs before a workout can increase your training capacity, so it would stand to reason that if you can train harder you will get better performance and fat loss. Thus, consuming carbs before training might actually be better for fat loss in the long run.

“Broenfeld”… I mean Brad Schoenfeld and colleagues (including Alan Aragon and James Krieger) conducted the first study to directly assess whether performing aerobic (aka cardio-based) training in a fasted or fed state led to greater reductions in body (seriously… how had this not been systematically studied before?).

I’ll spare you the nitty gritty on the subjects (the authors did a bang up job on the inclusion/exclusion criteria) but the study had 20 healthy female athletes in their early 20’s including a mix of university students and student-athletes.

The participants were provided a customized dietary plan prepared by Alan Aragon (I wonder if the girls knew the kind of attention they received during this study). The dietary plan was a hypocaloric diet that was 500 calories under their estimated energy expenditure and had protein set at 1.8 g/kg of body weight, with 25-30% of their calories coming from fat and the remaining from carbs.

The training intervention was 1 hour of “steady-state” aerobic exercise performed 3 days/ week. It was performed at a low-to-moderate intensity to “maximize” intraworkout lipid oxidation (aka fat burning). Heart rate monitors were also used to control intensity.

The investigators used My Fitness Pal to track food intake so it was likely pretty spot on for this study. They also received “guidance” throughout the study so they would stay on point.

Again, thank god they didn’t use bioelectrical impedance (BIA). They used one of the better methods of testing, Air Displacement Plethysmography, AKA BodPod.

The authors actually tested the data to see if it fit their assumption of “normality”… actually this is a big deal when dealing with human data as it is often not from a normal/Gaussian distribution.

They also used a battery of statistical tests . ..  which I won’t bore you with details but it was pretty spot on. My only gripe is the use of “trends”. . .but that is a conversation for another day and more just something I find an issue with stats that with the authors.

The first thing to note is that both groups consumed equal calories and had virtually identical macronutrient ratios, so we are good there.

When we look at the outcomes of change in body mass, BMI, and body fat% both groups lost weight, lowered their BMI, and lost fat. But most importantly, there was no difference between the two groups. Zero, zilch, none, nada, nine.

Now there are some caveats to the study that we can’t overlook (and I think the author’s would also agree). It does look like the effect size for the fasted group is bigger than the fed group for fat loss but it is also a big bigger for loss of lean mass. These differences are subtle, but as the study was only about 4 weeks long the differences might be amplified over longer periods. Currently, I don’t know whether that is the case but it is plausible. A longer follow up period could help flush that out, but I think the results still speak for themselves.

There is no appreciable benefit for fat loss by doing fasted cardio over a period of a month.

It looks like performing cardio based training in fasted state does not provide any benefit for fat loss. Interestingly, there is a ton of research showing that consuming carbs before a workout can increase your training capacity, so it would stand to reason that if you can train harder you might actually get better performance and fat loss. So perhaps training fed might lead to better results over the long term?