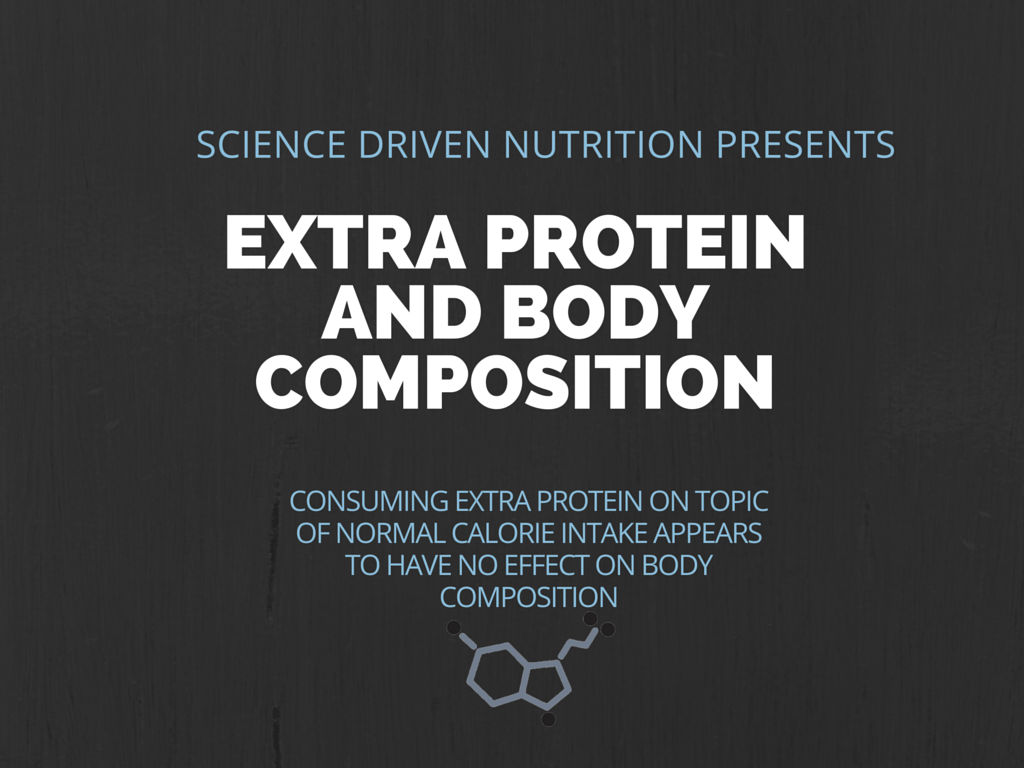 Antonio and his crew conducted the first study to directly assess whether consuming extra protein effects body weight and body composition. Essentially, if you eat more protein on top of your daily food calories will you gain weight?

The authors recruited 40 subjects who had been regularly resistance training roughly 8.5 hours per week for about 9 years. Now the authors unequally randomized the subjects to take into account the loss of subjects from potential lack of compliance due to the high protein diet as well as gaining additional information on the treatment itself. Which was a smart move as 10 participants did indeed drop out. This left them with 10 in the control group and 20 in the high-protein group

The control group was instructed to maintain the same dietary and training habits over the course of the study. The subjects in the high protein diet group were instructed to consume 4.4 grams of protein equal to 4.4 g/kg/d.

The investigators used My Fitness Pal to track food intake so it was likely pretty spot on for this study. Subjects who did not use My Fitness Pal did it “old-school” with paper and pen. Their diets were then transcribed using the Nutribase® program.

Consuming 4.4 g/kg/day from whole foods is pretty difficult so the participants on the high protein diet were able to consume commercially available whey and casein protein powder (MusclePharm® and Adept Nutrition [Europa®]).

As training could likely influence the results the participants were instructed to maintain their normal training and record it all so it could be accounted for in the analysis.

As with previous papers we have talked about they used one of the better methods of testing, Air Displacement Plethysmography, AKA BodPod.

Stats Baby!
The authors appropriately used a 2-way ANOVA with a Tukey’s HSD for post-hoc analysis.

First off, both groups had similar training volumes, so that variable is accounted for.

Consuming higher protein had no “statistically significant” effect on body weight or body composition. However, it looks like the higher protein may have resulted in an increase in lean mass, although we can’t say this at a level of 95% confidence based on the 2-way ANOVA.

Interestingly, an independent reader made an interesting statistical observation which was the following, “. . . if the data in Table 2 are correct, then there appears to have been a statistically significant pre–post increase in BW and FFM for the HP group. Using a one-sample t test with 19 degrees of freedom, 2-tailed p-values for the change in BW and FFM are, respectively, .0008 and .002. Although these are raw p-values, they should be small enough to retain significance after adjustment for multiple comparisons. The authors state that they analyzed the data by using 2-way ANOVA, a method that may have been inappropriate given the unbalanced study design and the need to model subjects as a random factor”.

I am inclined to agree with the idea of modeling the subjects as a random factor. So if we view the results in that light, then yes, higher protein may have increased BW and FFM, which is usually the goal of a higher protein diet so that would be a benefit of the diet.

This result is interesting in that it suggests that macronutrients may indeed play a role in how our bodies handle caloric excesses. Based on the data, the high protein diet either A) had no effect, or B) increased fat free mass but not fat mass. This suggests that the macronutrient you consume in excess can impact how your body handles that excess. In the discussion, the authors state, “Certainly, this dispels the notion that ‘a calorie is just a calorie.’ That is, protein calories in ‘excess’ of requirements are not metabolized by the body in a manner similar to carbohydrate.”

While this doesn’t shift out entire understanding of nutrition. . .  it does present some interesting data that needs to be fleshed out.

Consider me the next participant in the “eat a ton of protein, life weights, and see what happens” study.