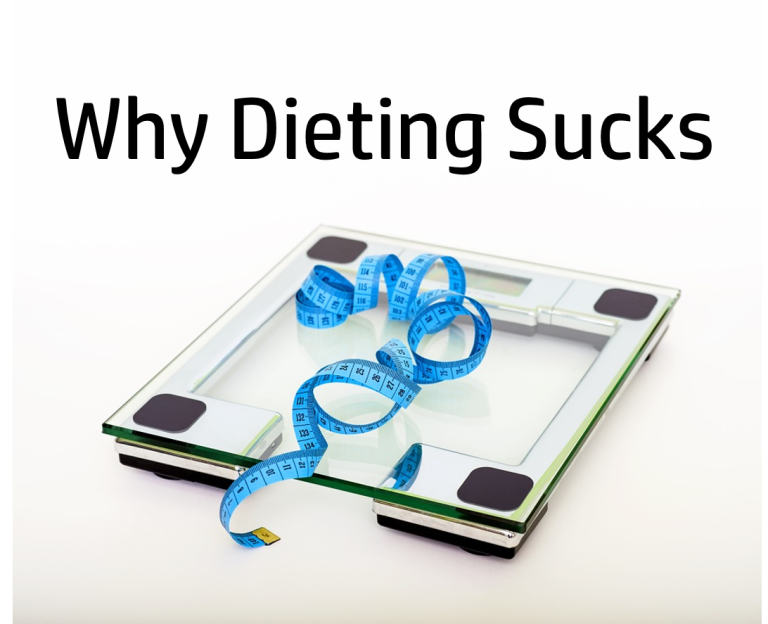 Tl;dr: “Dieting” is an abused tool in the health and fitness industry. There are better approaches. We need to start changing the tone of our discussion around nutriton.

Before we even get started I know this article is going to get a lot of people up in arms and I will probably catch some flack. Good, I hope it induces some cognitive dissonance (honestly, I also hope it helps website traffic). Plus, I run this website so I can decide to take a break from science and give my opinion on occasion. Let’s begin.

The nutrition industry is obsessed with “dieting”; a quick google searched yielded 6.92X10^7 results (nerd notation for almost 70 million).  When we usually think of the word “dieting” we think of a strict system used to lose weight. Our friend Merriam Webster defines it as, “to eat less or according to certain rules in order to lose weight”. As someone who has spent a long time learning about nutrition, working as a nutrition coach, and dieting themselves I think it is time to tell you what I think about dieting.

Here are a few reasons why.

There is a popular saying in our industry, “Exercise is terrible for fat loss”. I hate that saying and I hate it vehemently. Let me tell you why.

It is 100% true that when comparing diet and exercise, diet is a bigger component to fat loss than exercise. You can’t really argue with the data.  But it kind of misses a key point. Exercise induces a whole host of changes that provide both short term and long term benefit. Here is just a list of a few of the benefits: improved cardiac function, improved muscle metabolism, improved metabolic flexibility, increased resting metabolic rate, decreased resting heart rate, improved heart rate variability, lower stress, increased bone density, etc, etc, etc.  Dieting doesn’t really give you robust results like that. I mean it improves some of those things to a small degree, but not to the same extent exercise does.

Dieting sucks because it gets abused.

Here is how I see it. As a whole, our industry kind of abuses dieting. It is literally prescribed to everyone, at all times, in every magazine.

Most people would be far better off spending more time being well fed, and using that food to maximize training that improves their strength, power, balance, endurance, and conditioning and then using short, smart, dieting cycles to focus on fat loss. In fact, the more often you spend in a “normally fed” state the more effective short, intense, periods of dieting or cutting are. “Dieting” should be used in more of a controlled, pointed, manner to elicit a specific effect over a shorter time window.

Sadly, most of the time people just “diet” for years on end chasing some magical number on a scale and they miss a lot of the benefits from accumulating years of high quality training and being well fed.

Life is about more than a low body fat %

In the last 10 years I have spent substantial amounts of time walking around at body fat ranges of 5-14%. 5% sucks. . . anyone who tells you otherwise is not human.  Life is about way more than a super low body fat percentage. Trust me. I remember in my conversation I had with Dan John a year or two ago where he said, “Look, if you have a 6 pack, God bless you. But if you have a 6 pack and are living in your parents’ basement at 30 you really need to figure out your priorities”.

Also, during my time spent around 5% body fat here are a list of things I thought would magically happen when I got shredded but didn’t:

Look, being lean, fit, and healthy is awesome and I would love to see more people maximizing their potential as a human being. But the recent trend is that lean (I would say 8-16% for men and 17-24% for women) isn’t good enough, you have to be shredded. Being shredded is a pretty cool thing but it doesn’t change your life and it has a huge opportunity cost. You have to make a lot of sacrifices and your diet begins to subsume a big part of your life. Also your sex drive often plummets; not cool.

Muscle mass is one of the biggest components to quality of life as you age.

Carrying a high amount of lean muscle mass is one of the best indicators of aging well and having a high quality of life as you progress into your senior years. Dieting extensively and for a long time doesn’t help you put on muscle tissue, in fact it directly impedes it.

Casting your moral authority over people because you adhere to a strict diet is silly.

Admittedly, this one took me a long time to realize myself. I used to look down my nose at people who ate the birthday cake or had the donut in the break room. Your own will power and dietary choices do not make your morally superior to other people.

Now this doesn’t mean that you can’t take pride in having a healthy, strict diet that helps you reach your goals. In fact, I tell my clients to take pride in it because it is an awesome accomplishment when you stick to something that is difficult to reach a goal. Just don’t cast your goals on someone else and make a moral judgement about their character because they aren’t as “hardcore as you”.

No child said, “I can’t wait to grow up and be on a diet”. When you stop and really look at “dieting”, it pretty much sucks. Now that doesn’t mean we throw the idea of developing healthy eating habits out the window and that we shouldn’t use nutrition as a way to help address the obesity issue in our world but I think as an industry we should probably start changing the tone of our conversation around nutrition.