The Nail in the Low-Carb Coffin 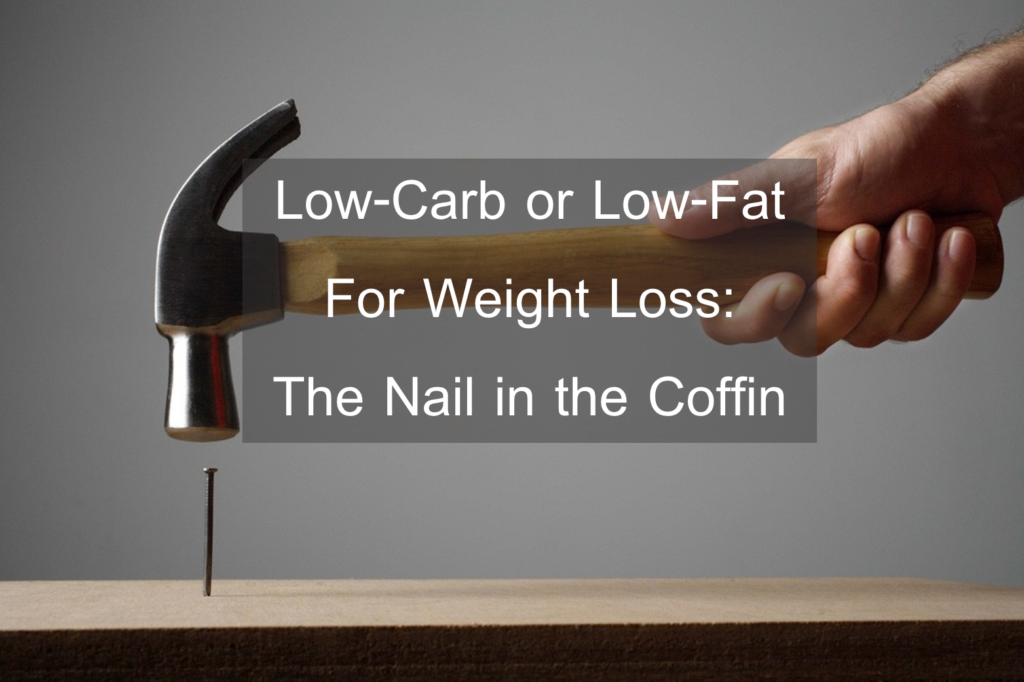 For a long time there has been a substantial discussion about whether low carbohydrate or low fat diets are more effective for weight loss. Over the past several years we (the scientific community) have been addressing this question through collections of very well controlled studies and have shown that on aggregate, there is no real difference between low-carbohydrate or low fat diet studies for weight loss.

There has been some thought that a person’s genotype or insulin status might identify key metabolic features that would make a person more likely to lose weight on a low carb diet, or a low fat diet. In fact, we recently explored these ideas in two articles and there was some evidence to suggest that insulin status might predict carbohydrate tolerance and that people with a specific phenotype of insulin signaling and/or underlying genotype might benefit more from low carbohydrate diets than low fat diets.

A study released today in The Journal of the American Medical Association explored the question of whether genotype (carbohydrate or fat sensitive) or baseline insulin status forecasted the efficacy of low-carbohydrates or low fat diets for weight-loss over a 1 year period.

To boil this study down to its most basic elements, the study took men and women (aged 18-50; 28<BMI<50) and randomized them to the low-fat or low-carbohydrate diet (Figure 1), which they followed for 12 months. The author’s also used their genotype and baseline insulin status to stratify them.

The participants attended classes over the 12 months to help them understand more about their diets as the study went along and also to increase participant retention and adherence.

Remarkably the study had about 80% retention, a very high retention rate for a 12-month long, free-living diet study. At the end of the twelve months, total daily calorie intake was do different between the groups and both diet arms had a roughly 500-600 calorie per day reduction.

In aggregate, both diets lost around 5-6kg over the course of 12 months, each lost about 2% body fat, had modest changes in in blood lipids (the low carb group had a significantly higher HDL by ~2 mg/dL and significantly higher LDL by about 6 mg/dL and significantly lower triglycerides by ~18 md/dL). There was no real difference between diets in regards to fasting glucose or fasting insulin with both showing modest improvements (See Table 3 of paper).
To point to some additional data, in both arms, about 12% of participants in both arms saw improvements in “metabolic syndrome”, and both groups saw a decrease of ~70 kcals a day in overall resting energy expenditure and not change in energy expenditure relative to their body mass.

This data is fairly conclusive that when it comes to weight loss, over a 12 month period there is virtually no difference between low-carbohydrates or low- fat diets for weight loss. This supports previous metabolic ward studies and also very large trials such as the A to Z trial.

Now, into finer detail. As previously mentioned, there we no differences found when the entire dataset was analyzed in aggregate. Now what happens when we use more “precision medicine” and stratify people based on their supposed metabolic genotype and their fasting insulin?

The results mirror those seen in the aggregate analysis. There is no difference in weight loss over a 12 month period in decent sized samples when low-carbohydrate diets are matched to low-carbohydrate or high insulin levels compared to a higher carbohydrate, lower fat diet.  This figure provides some incredibly compelling data.

When we (the scientific collective) examine a question, specifically in the context in nutrition in humans, the best approach to answering the question is to establish the validity of the data at an observational level, a mechanistic level, and at an intervention level. It is also important to test it through a variety of studies using similar, but different methodologies to ensure the hypothesis is robust to different angles of attack.

A series of randomized controlled trials in the early 2000s provided robust interventional data when scientists demonstrated that dietary interventions that ranged from low-carbohydrate to low-fat diets were equally efficacious for weight loss when calories and dietary adherence were accounted for (1,2). These large trials indicated that macronutrients per se, were of minor importance to the qualia of a diet that determines its efficacy. Two mechanistic studies demonstrated that in the short term, there appear to be minor, if any, differences between low-carbohydrate or low-fat diets in the context of weight loss and changes in body composition or resting energy expenditure (3,4).  Furthermore, meta-analysis of studies directly examining low-carbohydrate versus low-fat diets on weight loss support the finding of this most recent study as well.  While, this is but a small subset of the literature surrounding this, it all points to macronutrient ratios not being a large determining of the efficacy of a diet for weight loss. The hypothesis that carbohydrates nor fats per se, make large differences in weight loss, passes the Swiss cheese model of scientific investigation and is supported the by broader literature base.

In addition to support the broader literature base and providing some very compelling evidence to close the book on which macronutrient ratio is best for weight loss, the data in this paper also indicate that dietary interventions may not need to be as tailored to each person’s unique underlying physiology as one might think (or hope if you are a genetic based weight loss nutrition company).

The current paper stratified people by established genotypes and on baseline levels of insulin status and explored the hypothesis that after the large population effects are accounted for, could stratification by genotype or underlying insulin status improve outcomes. Previous reports have indicated there may be additional benefit (and we have reported on that previously as well) to low-carbohydrate diets in people with insulin resistance (5,6). The present study shows that in larger groups of adults, this effect is either so minor it is not detectable, or not present. The present study has 3-4 times the sample size as previous reports and a longer follow up (52 weeks compared to a previous 12 weeks).

The careful work of dedicated scientists over the course of decades has helped the nutrition science community piece together a lot of “mutable truths” and we continue to learn and improve our understanding of the role of nutrition, diets, and exercise in the context of health and disease.  As of now, there appears to be a substantial amount of evidence to substantiate the hypothesis that dietary carbohydrates and dietary fat as macronutrients do not, by themselves, drive the efficacy of diets for weight loss.  So did science really put the nail in the low-carb coffin? Not really, it showed that it is just as effective as a low-fat diet. Which means it can be useful in some contexts but is not the holy grail of dieting.

For the interested reader, a much more detailed analysis of this study was done by my friends (awesome humans as well) over at Examine.com where they dive into a lot more detail about the nuances of this study. Go check that article out HERE… and also, spend the next 5,000,000 hours combing through their unbelievable amount of very top notch content.

*We had enough data to make very strong claims based on previous data but this solidifies in a strong way.