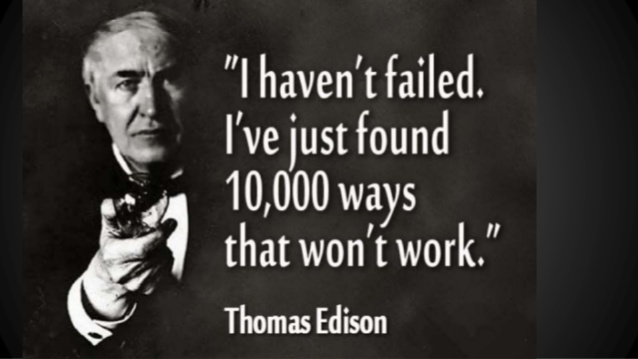 I am a scientist by trade and view the world empirically. Meaning, I learn from observation and experimentation.

In science, just like in life, our experiments often fail and we learn more from those failures.

I have been reflecting back on the plethora of not-so-good experiences I have had up until this point of my life, and I wanted to share with you some of the things I have learned through this scientific method of self-trial and error.

Essentially, I want you to learn from my mistakes.

Every time you do something wrong or fail, you will learn and grow. You then can cross it off the list of things to try so that you don’t repeat it in the future.

When it comes to nutrition, exercise and diets, I don’t like using the word “wrong”, however staying within the context of this article, I will make the exception. Throughout your journey, your diet will go wrong which subsequently effects your goals.

It happens to all of us, even the best (I fall about 3 standard deviations below the best).

But here is one key thing that separates the best from the rest. They admit to the mistakes they made, they do not let their ego get in the way of their progress and they act to correct the wrong doing, rather than pointing the finger at others.

In fact, the quicker you make mistakes the faster you can make the change in order to continue forward progress.

Below are a few mistakes that I have made over the years:

That is just the beginning of the list and I look forward to adding to it.

In short, allow yourself to be wrong. Try something, be honest in your evaluation of the success or failure of it, and then act on that.

I am going to repeat this one more time. Building muscle takes patience and flexibility.

Despite what most articles like “The 4 Hour Hack to Acquire a Six Pack” inform you, building muscle takes a lot of time.

There is a reason most successful body-builders are not people in their late teens or early twenties (disclaimer: there are exceptions to this rule). Accumulating massive amounts of tissue takes time and you have to be ok with that. Shaping your body is a marathon, it is no sprint.

You also have to be flexible in your training style and your nutrition.

Muscle growth occurs along a spectrum of rep ranges and loading schemes. There is a lot of benefit to going through periods of High Load, Low Rep style training and there is a lot of benefit going through periods of Low Load, High Rep Training. Utilize the full spectrum just like you would use the full spectrum of colors when it comes to eating vegetables and fruit.

Nutrition: For most of us, eating a super strict and ‘clean’ diet (a la the chicken, kale, and the super powers of tilapia thinning the skin) is going to make putting on substantial amounts of muscle mass almost impossible. Why? I’m glad you asked. First, you need calories to build tissue, and in order to get enough you’ll have to eat more than fish, chicken and kale to do so. Second, you need a plan that is sustainable over long periods. Although individual’s pallets will vary, and some people may like the same foods day after day (nothing wrong with this), most of us love our cake and want to eat it too. Building in flexibility into your diet and taking the long view is incredibly important, which is why being able to enjoy that piece of cake from time-to-time is impeccable to your health and psyche.

When we plateau or get stuck our first instinct is to double down and increase our efforts. We think, “If I just diet a little harder” or maybe we think, “If I train two-a-days” that we will magically break through the plateau. While this sounds intuitively right, in my opinion, I think it is often the wrong approach.

I think John Meadows said it best on our podcast with something to the effect of, “If something isn’t working, it is often best to get out of our own way and try a different approach”.

The Placebo Effect is Powerful

In our pursuit of evidence based fitness and using pure data to drive our decisions we often forget the human nature aspect of things.

The effect of supplementation is a perfect example of this.

Let’s take BCAA’s for example. The research is fairly mixed on BCAA’s having an “anti-fatigue” effect during training, with it probably having almost no real physiological effect on fatigue during training.   Now that doesn’t mean we just chuck BCAA’s out for every single individual. Perhaps it is something that has been a habit for someone.

Maybe the taste, smell, and just thought of it during training gives them a mental boost to increase their performance in the gym? If that is the case, hell I would buy my clients BCAAs just for that effect alone.

Think that analogy holds no weight? That psychological factors of taste or habits like that don’t really influence your behaviors or actions?  What about the last time you loaded up at dinner at your family gathering and were so stuffed you thought you might die, vowing to not have dessert because there was no possible way you could eat any more. Then when the steaming hot cookies and ice cream were served you manage to muster up the gusto to smash on some dessert.

Consistency is the Trump Card

Let me use a story to paint the example.
90% of the time I train at a commercial gym that I have been at for years. Whenever I train alone I put my headphones in (no music) and train my face off while I listen to other people’s conversations and observe their training.

There is one individual in particular who comes in sporadically the same time of day I do and is always talking about the latest program he is on (I’ve heard Wendler, Mountain Dog, Layne Norton, Elite FTS, etc…I mean the dude has probably spent a miniature fortune on programs). He comes in, trains like someone going for a stroll in the park, and leaves. This dude is essentially the same he was 5 years ago.

There is another person who is there every single morning I go (I admit, he goes more days a week than I do. His hustle is more than mine). I’ve never heard him talk about his training program, never seen him do anything fancy or trendy workout. The man comes in, trains at a level I haven’t seen in any other gym I’ve been in, and leaves. During my time at the gym I’ve seen this guy morph into national level body-builder.

As Michael Jordan said, “I’ve missed more than 9000 shots in my career. I’ve lost almost 300 games. 26 times, I’ve been trusted to take the game winning shot and missed. I’ve failed over and over and over again in my life. And that is why I succeed.”

Be MJ, be great, don’t be mediocre.