Do Genetics Trump Diet and Exercise? 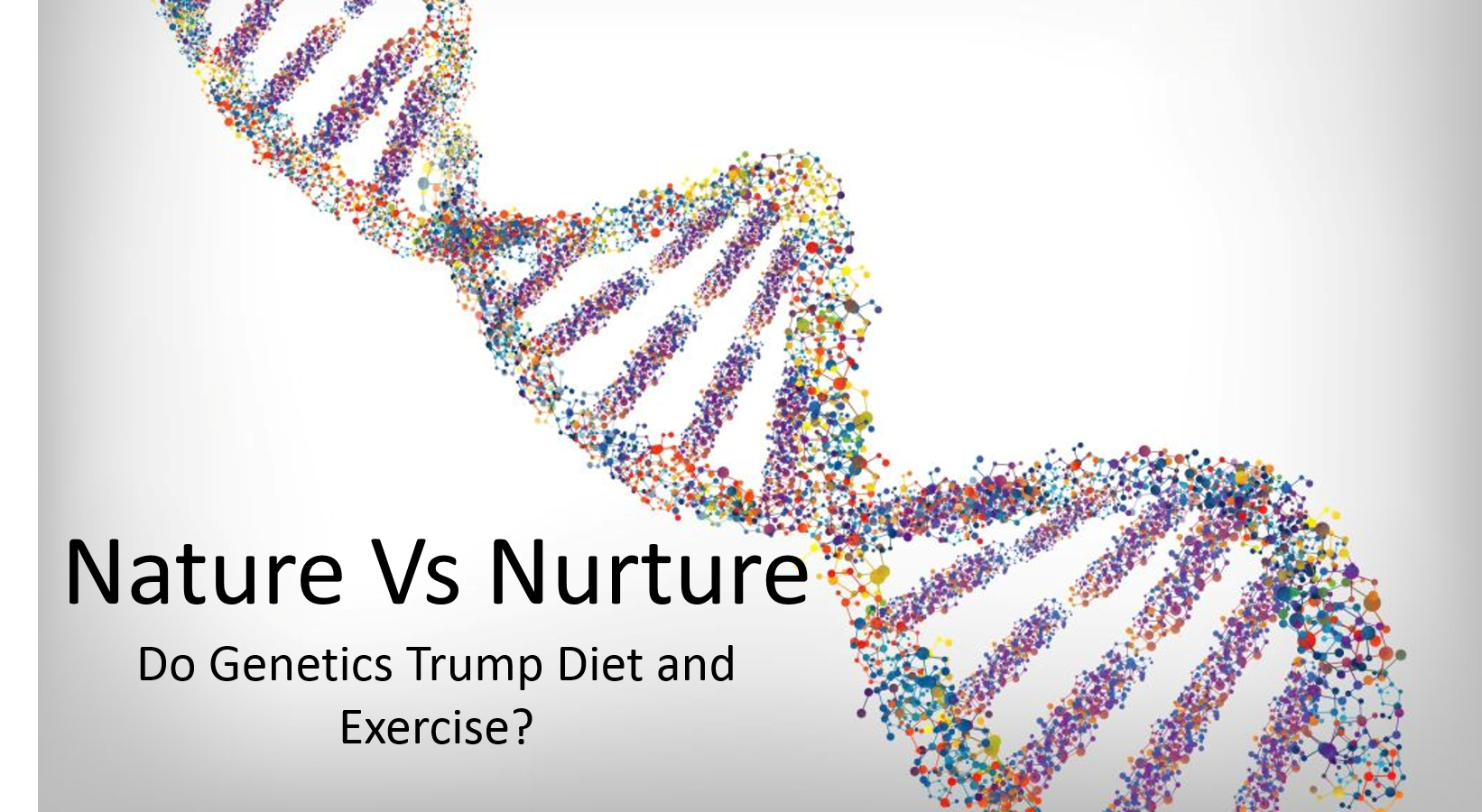 Nature versus Nurture. . . . the argument of genetics versus environment in behavior and health outcomes has raged for decades. Fortunately for us, nature has gifted us natural experiments that may help us tease out how genetics interact with diet and physical activity in obesity.

Those experiment are twin studies.

In a recent twin study, “Physical activity and dietary intake in BMI discordant identical twins” physical activity and food habits were measured in 16 female monozygotic twins (identical twins from the same single embryo and share the same genome) with a mean BMI discordance of about 4. Essentially, the researchers took genetic copies who had become different in body weight and used 3-day food logs and 7 days of accelerometer data to get a very rough estimation whether food and diet could explain most of the difference in body weight between the two.

To break down the results as straight forward and possible, I am going to summarize their key findings, then provide a little context and nuance to the data…

(1)The twin with the higher BMI spent about 6.1 minutes less per day doing moderate to vigorous physical activity.

One could possibly extrapolate that to an extra 100 calories a day being burned in that individual (the 100 is being generous). Over the span of a year that adds up to approximately 36,500 calories more being burned which, if we invoke the calories-in-calories-out model and the 3,500-calories-per-pounds scheme, would be ~10 pounds discrepancy between the two individuals in the span of a year.

So it is plausible that this minor amount of physical activity is enough to drive that difference. However, I remain a bit skeptical.

Next we see almost no difference in overall calorie intake, but a difference in fat intake. From this data alone, we honestly can’t tell if this is meaningful or not.

Now granting those assumptions. it seems indeed possible that the simple fact of a little bit more energy and lower fat intake could indeed result in this discordance. However, I would guess it is a lot more nuanced than that and that there is a lot of additional data that needs to be considered.

There is something else we need to consider as well: the limitations of this study that reduce its impact—they are fairly important ones, I might add. There are several minor limitations (e.g. dietary recall) that we could argue over but lets put our attention on the biggest one. In my perspective, the most significant limitation is the fact that they don’t provide dizygotic twin groups. This would have provided additional insight on the extent of genetics.

I am glad you asked. Essentially, if genetics played only a small role in the effect of exercise and diet on BMI, then the discordance between monozygotic and dizygotic twins should be similar. If there was a fairly substantial role, one would imagine the discordance to be smaller in the monozygotic twins. An even further level of control would be age, sex, height, weight, and socioeconomic status controls randomly selected from a non-twin population. This would essentially show the effect of genetics in a quasi dose dependent manner. I attempted to put this in a figure on the next page.

Based on the data presented, the only conclusion we can draw is that genetics are not the sole influencer of BMI. This suggests that nurture does indeed have an effect on nature.  Genetics definitely play a role, but how much? We don’t precisely know.

While your genes are what they are, you directly control your environment and the stimuli your body receives.