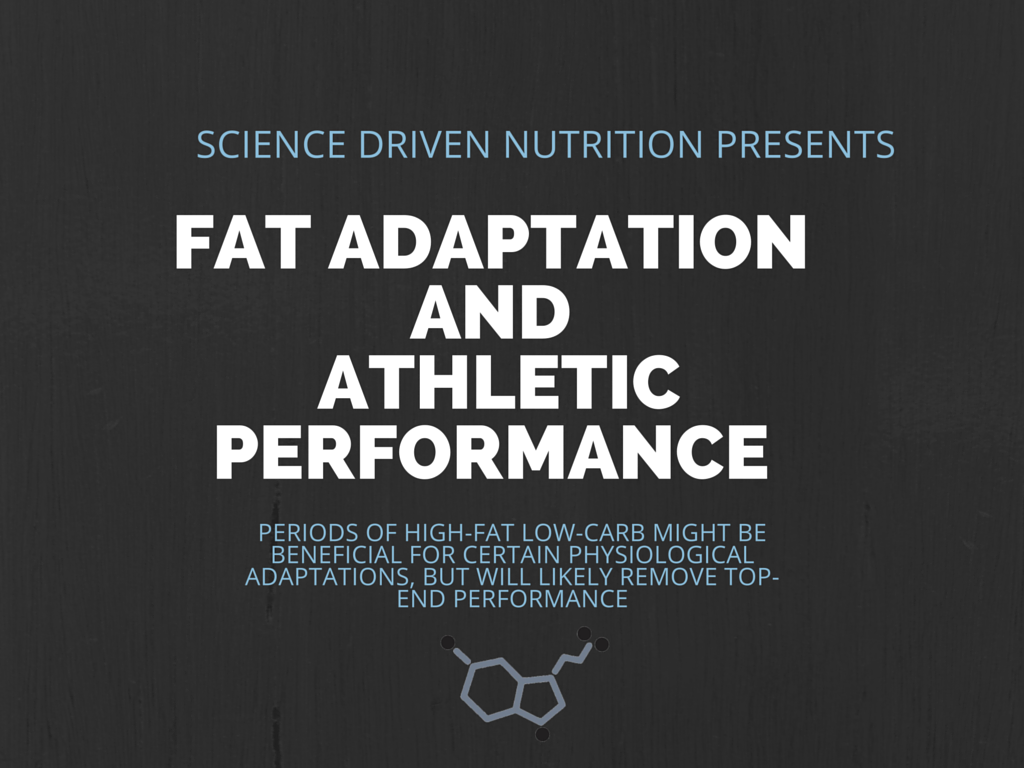 Fat for fuel in the athletic population has grown in popularity ever so more as various diets out there push the butter latent coffee, bacon and coconut oil. Various studies have begun to show that adapting to a high fat, low carbohydrate and moderate protein diet can augment AMPK activation (1), increase beta-oxidation and mitochondrial biogenesis (2).

During a period of fat adaptation, muscle and liver glycogen stores are depleted, thereafter, your ability to utilize fat as fuel is enhanced (3). So if the primary objective is to utilize fat more efficiently, fat-adaptation periods have merit.

However, when it comes to the sub-elite and professional athletic population, is a long-term fat adapted athlete actually beneficial? Or could this hinder an athlete performing high intensity exercise and/or competing in endurance based events at a very high threshold (think elite marathon runners running sub ~2 hrs)?

When you look at the amount of energy (or ATP) produced per gram of substrate, fat takes the cake, or this case bacon, over carbohydrates (CHO). However, when you factor in intensity, as you further progress to higher and higher workloads, the rate at which one needs to produce energy accelerates at an exhilarating pace. In turn, CHO begins to trump fat as the preferred substrate for fuel. This is due in part that CHO can be oxidized into pyruvate and shuttled into the mitochondria of a cell more efficiently than that of fat. In order for this process to occur, a key enzyme is needed, pyruvate dehydrogenase (PDH).

If you decrease the activity of PDH you subsequently impair your ability to utilize both glycogen and glucose for fuel.

In order to demonstrate the above, we turn to a 2006 study that shows both the positive and negative effects of a fat adapted diet followed by the reintroduction of CHO in endurance trained individuals.

Each subject went through two 7-day trials in a randomized, crossover fashion with a 2-week washout period between trials. Subjects were instructed to consume one of the two following diet protocols:

(1) 5-day fat adaptation diet followed up with a 1-day CHO refeed day all while performing supervised training sessions. On the 7th day, each participant went through a high-intensity cycling protocol after an overnight fast;

(2) Identical protocol to the above, just high CHO and low fat.

Note: Each diet was calorically matched.

Furthermore, all the food the subjects consumed during the entire study was provided to them in prepacked containers and food diaries were checked daily to insure compliance.

Training was individualized to the specific subject in order to match their training history and current training regime. Training logs were kept throughout the protocol and checked daily (similar to that of the food logs).

This is actually an awesome way to go about intervention towards training, and is highly applicable to real life scenarios because of the inter-individual variability between athletes.

After a familiarization phase before the dietary interventions, subjects completed a 40-minute steady-state cycling session at 70% VO2peak (assessed during the familiarization phase), rested for 1 min, and then commenced a 60-second all-out sprint at 150% peak power output followed by a 5-minute recovery and a final TT (4 kJ/kg BM) to be completed as fast as possible [see figure below for a diagram of protocol].

Lactate, glucose, insulin, free fatty acids, epinephrine and norepinephrine were assessed at 5 different time periods throughout the experimental visit via a catheter inserted into the antecubital vein.

Four muscle biopsies of the vastus lateralis muscle for each experimental visit in order to assess the activity of PDHa, glycogen content of the muscle, HSL and various muscle metabolites (PCr, ATP, ADP, AMP, Pyruvate, G-6-P, Acetyl-CoA, and Acetylcarnitine).

The authors used a 2-way ANOVA (treatment x time) to determine significance of the finding between the treatments and the steady-state cycle. If significance was found, the authors assessed the finding further with a post-hoc. Paired sample t-tests were performed to look at the differences in muscle metabolites and blood biomarkers between dietary interventions.

First off, the authors did an impeccable job at controlling the subject’s diet to the best of their abilities. The only way to further control/manipulate dietary adherence would have been throwing the subjects into a nutritional ward during the duration of the study (not very applicable). But since the authors provided prepacked meals throughout both interventions, it further increased the likeliness of adherence by the subjects.

Furthermore, dietary caloric value of both the HFLC and LFHC diets were matched calorie for calorie per day and cycling training load was identical between conditions (293.4 ± 19.9 km for HFLC and 292.6 ± 16.6 km for LFHC).

The CHO refeed day (day 6) was also matched between conditions and subjects were refrained from training on that day.

Upon CHO re-introduction, there was no difference in muscle glycogen storage between conditions prior to the exercise protocol on day 7.

During the experimental visit, the HFLC diet increased fat oxidation during the stead-state protocol by roughly ~45% and decreased CHO oxidation by ~30%, when compared to the LFHC diet. HSL activity increased by roughly 20% during this time frame as well (HSL is important in catalyzing stored triglycerides). This gives the notion that in 5 days, one can better utilize fat as fuel and spare muscle glycogen if CHO are restricted, and is supported by others (4 5).

Although there was no differences seen between the time to complete the TT, which lasted roughly ~13.18 ± 0.89 min HFLC and 13.26 ± 0.95 min LFHC, the interesting part of the study comes from the 50% reduction in PDH activity at rest even after the day prior of CHO reintroduction in the HFLC group.

Coupled with this was a reduction of pyruvate oxidation and glycogen utilization in the HFLC group. Meaning, individuals had an impaired ability to utilize glucose and glycogen for fuel even after the reintroduction of a high CHO diet the day prior.

But a question arises if this is actually a negative or a positive based on the performance measurements of the current study. If one were to only factor in the current study at hand, one might say yes. However, context becomes a virtue and if you pull up previous literature on the matter, you will find not so favorable outcomes on both high intensity sprint performances and prolonged 100-km time trials in endurance trained cyclists (6).

Furthermore, Dr. Stellingwerff himself made a great infographic showing the positive, negative and no differences seen of a low-CHO diet on athletic performance [Fig 2].

In addition to this, if we turn our attention to a few case-studies on both Olympic Level Marathon Runners (Canadians, Kenyans, and Ethiopians) and World Class Ultra-Endurance Runners (one of which won the Western States 100-mile foot race 2 times in a row from 2014 to 2015 and broke the course record), we will find a common trend regarding diet composition amongst all athletes.

The first table below shows the dietary composition of elite Kenyan and Ethiopian Marathon runners, whom which hold the world record for the fastest marathon time recorded to date…and basically dominate this distance currently in The Olympic Games [Figure 3].

In short, if you want to remove the top end of your race performance and go slower when trying to maintain intensities ≥75% [roughly] of your VO2max, go low CHO during competition. However, if are trying to optimize your performance and be the best you can be, like a marathon runner trying to finish a race as fast as possible or a CrossFIT athlete trying to finish the WOD the fastest…ideally you should be consuming a good amount of CHO to fuel this both before and potentially during competition.

I’m not a LCHF zealot, and I do not believe a lot researchers out there that advocate high CHO consumption in order to improve athletic performance are either. Simply from a physiology standpoint, strategically planning a period of LCHF diet into ones training protocol for a short-duration could be extremely beneficial to further augment mitochondrial biogenesis and progress athletic prowess (7). I believe there is a good time for periods of low CHO availability, but based on the literature, it doesn’t seem like it should be used both during or even days leading up to competition because of ones impaired ability to utilize CHO.

Dylan is from Ferndale, Washington US and is currently pursuing a Masters Degree at the University of British Columbia (Vancouver, BC Canada), working with Dr. Michael Koehle, Dr. Trent Stellingwerff & Dr. Don McKenzie, specializing in nutrient timing and hematology. He is a current intern for UBC Varsity Athletics, a Research Assistant for Lululemon Athletica’s Innovation Team, and a Research Assistant for the Canadian Sport Institute – Pacific. When not locked in his dungeon [apartment] researching on various performance topics, he partakes in his other passions, weight-lifting, cycling (track and road), mountain running and watching an abundant amount of Dragon Ball Z.